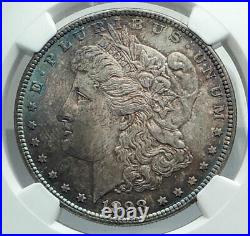 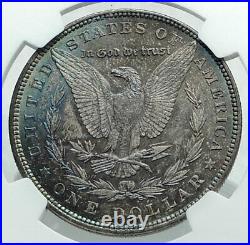 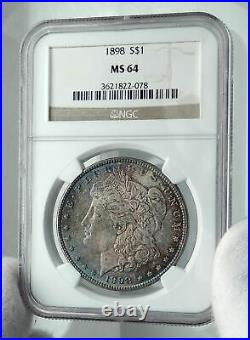 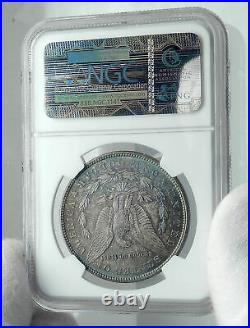 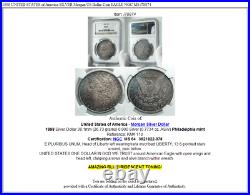 Item: i78874 Authentic Coin of. United States of America – Morgan Silver Dollar. 1898 Silver Dollar 38.1mm (26.73 grams) 0.900 Silver 0.7734 oz. ASW Philadelphia mint Reference: KM# 110 Certification: NGC. MS 64 3621822-078 E PLURIBUS UNUM, Head of Liberty left wearing tiara inscribed LIBERTY; 13 6-pointed stars around; year below. UNITED STATES ONE DOLLAR IN GOD WE TRUST around American Eagle with open wings and head left, clasping arrows and olive branch within wreath. AMAZING BLUE IRIDESCENT TONING! The Morgan dollar was a United States dollar coin minted from 1878 to 1904, and then again in 1921. It was the first standard silver dollar minted since production of the previous design, the Seated Liberty dollar, ceased due to the passage of the Coinage Act of 1873, which also ended the free coining of silver. The coin is named for its designer, United States Mint Assistant Engraver George T. The obverse depicts a profile portrait representing Liberty, while the reverse depicts an eagle with wings outstretched. The dollar was authorized by the Bland-Allison Act. Following the passage of the 1873 act, mining interests lobbied to restore free silver, which would require the Mint to accept all silver presented to it and return it, struck into coin. This act, in turn, was repealed in 1893. When those silver reserves were depleted in 1904, the Mint ceased to strike the Morgan dollar. The Pittman Act, passed in 1918, authorized the melting and recoining of millions of silver dollars. Pursuant to the act, Morgan dollars resumed mintage for one year in 1921. The design was replaced by the Peace dollar later the same year. In the early 1960s, a large quantity of uncirculated Morgan dollars was found to be available from Treasury vaults, including issues once thought rare. Individuals began purchasing large quantities of the pieces at face value, and eventually the Treasury ceased exchanging silver certificates for silver coin. Beginning in the 1970s, the Treasury conducted a sale of silver dollars minted at the Carson City Mint through the General Services Administration. In 2006, Morgan’s reverse design was used on a silver dollar issued to commemorate the old San Francisco Mint building. World-renowned expert numismatist, enthusiast, author and dealer in authentic ancient Greek, ancient Roman, ancient Byzantine, world coins & more. Ilya Zlobin is an independent individual who has a passion for coin collecting, research and understanding the importance of the historical context and significance all coins and objects represent. Send me a message about this and I can update your invoice should you want this method. Getting your order to you, quickly and securely is a top priority and is taken seriously here. Great care is taken in packaging and mailing every item securely and quickly. What is a certificate of authenticity and what guarantees do you give that the item is authentic? You will be very happy with what you get with the COA; a professional presentation of the coin, with all of the relevant information and a picture of the coin you saw in the listing. Additionally, the coin is inside it’s own protective coin flip (holder), with a 2×2 inch description of the coin matching the individual number on the COA. Whether your goal is to collect or give the item as a gift, coins presented like this could be more prized and valued higher than items that were not given such care and attention to. When should I leave feedback? Please don’t leave any negative feedbacks, as it happens sometimes that people rush to leave feedback before letting sufficient time for their order to arrive. The matter of fact is that any issues can be resolved, as reputation is most important to me. My goal is to provide superior products and quality of service. How and where do I learn more about collecting ancient coins? Visit the Guide on How to Use My Store. For on an overview about using my store, with additional information and links to all other parts of my store which may include educational information on topics you are looking for. The item “1898 UNITED STATES of America SILVER Morgan US Dollar Coin EAGLE NGC MS i78874″ is in sale since Tuesday, June 25, 2019. This item is in the category “Coins & Paper Money\Coins\ US\Dollars\Morgan (1878-1921)”. The seller is “highrating_lowprice” and is located in Rego Park, New York. This item can be shipped worldwide.