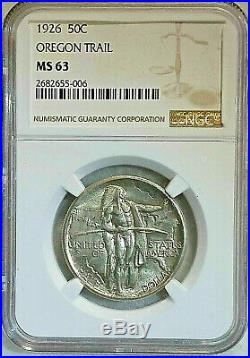 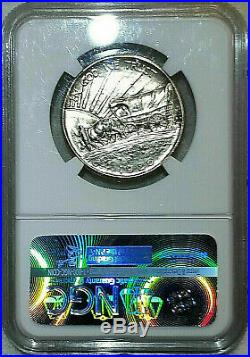 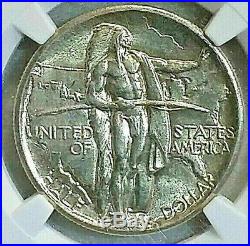 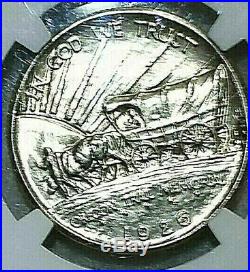 Offered here is a 1926 Oregon Trail Commemorative Half Dollar. It is graded by NGC as MS-63. The coin in the above pictures is the one you will receive. Despite having one of the most beautiful design in the series, the Oregon Trail Half Dollar is usually cited as the best example of the abuses which began to take place within commemorative coin programs. The obverse of the Oregon Trail Half Dollar was designed by Laura Gardin Fraser. It features a covered wagon drawn by two oxen moving west, towards the setting sun. The inscription In God We Trust appears above with Oregon Trail Memorial and the date below. Officially, the US Mint states this as the obverse of the coin, although the designers of the coin and many collectors consider this the reverse of the coin. The other side of the coin was designed by James Earle Fraser. The full figure of a Native American in headdress is shown. He stands before a map of the United States with the Oregon Trail marked, with his left hand outstretched to the east and a bow in his right hand spanning the continent. The inscriptions read United States of America and Half Dollar. The maximum authorized mintage for the program was set at a lofty 6 million pieces, which was the largest authorization for commemorative coin thus far. Since the law authorizing the coins did not include a specific time frame or mint, the Association requested more coins struck in subsequent years and from different mints. Additional coins would be minted in 1928, 1933, 1934, 1936, 1937, 1938, and 1939, variously at the Philadelphia, Denver, and San Francisco Mints. All coins remain relatively accessible for collectors of today, despite some lower mintages. Some issues are available in exceptionally high grades at relatively affordable prices. Oregon Trail Half Dollar Coin Specifications. Designer: Laura Gardin Fraser (obverse), James Earle Fraser (reverse) Composition: 90% silver, 10% copper Weight: 12.50 grams Diameter: 30.6 mm Authorization: Public Law 69-235 Maximum Authorized Mintage: 6,000,000. Oregon Trail Half Dollar Mintages. 1926: 47,955 1926-S: 83,055 1928: 6,028 1933-D: 5,008 1934-D: 7,006 1936: 10,006 1936-S: 5,006 1937-D: 12,008 1938: 6,006 1938-D: 6,005 1938-S: 6,006 1939: 3,004 1939-D: 3,004 1939-S: 3,005. The item “1926 Oregon Trail Commemorative Silver Half Dollar NGC MS 63 Mint State 63″ is in sale since Tuesday, September 10, 2019. This item is in the category “Coins & Paper Money\Coins\ US\Commemorative\Silver (1892-1954)”. The seller is “woodlandtreasure” and is located in Baileyville, Maine. This item can be shipped to United States, Canada, United Kingdom, Denmark, Romania, Slovakia, Bulgaria, Czech republic, Finland, Hungary, Latvia, Lithuania, Malta, Estonia, Australia, Greece, Portugal, Cyprus, Slovenia, Japan, China, Sweden, South Korea, Indonesia, Taiwan, South africa, Thailand, Belgium, France, Hong Kong, Ireland, Netherlands, Poland, Spain, Italy, Germany, Austria, Bahamas, Israel, Mexico, New Zealand, Philippines, Singapore, Switzerland, Norway, Saudi arabia, Ukraine, Kuwait, Croatia, Malaysia, Brazil, Chile, Colombia, Ecuador, Egypt, Iceland, Pakistan, Viet nam, Uruguay.