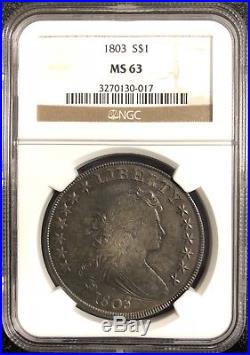 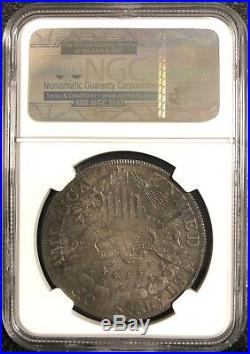 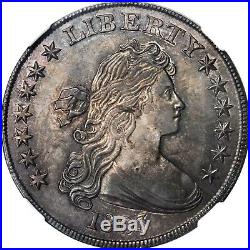 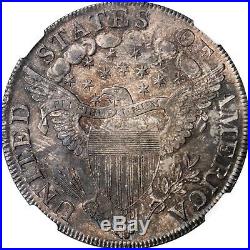 1803 Draped Bust Silver Dollar. This satiny, exceptionally smooth, boldly defined piece is sure to have no difficulty finding its way into an advanced early dollar cabinet. Both sides are expertly centered in strike with full denticulation and uncommonly sharp devices for the type. Handsome and richly toned, as well, we note blended copper-russet, charcoal gray and antique gold throughout. Areas of silver gray near-brilliance are also intermingled in isolated areas, and the toning has an iridescent quality that allows ready appreciation of the underlying luster. There are no outwardly distracting abrasions, and a tiny nick at the junction of Libertys neck and breast is mentioned solely as a useful pedigree marker. This condition rarity is tied with two others at most as the finest known of this die pairing. The high quality of the fields and devices are outstanding and rarely are Draped Bust dollars of any variety found at the Choice grade level. This was the final year of production for the silver dollar denomination, which suspended coinage after the 1803 dated coins were struck (some of these may have been released by the Mint in 1804 and 1805, but all were dated 1803). The obverse die was only used on this die pairing and then retired, likely as silver dollar production came to a halt — were it not for this fact this would be unusual as most dies were used until they failed due to cracks and/or severe clashing. The reverse die had been used to coin six prior die varieties starting in 1801, and this is the final use of this die as well. Today, given the demand for high grade early coins, stellar examples like this find a very ready market when they are offered. This is all the more expected when the coin offered is both tied as the finest known of the variety and is a significant condition rarity for the overall issue. NGC in their Census notes that there are seven grading events at this lofty level encompassing all of the 1803 die varieties, and just two are finer. This condition rarity will certainly add considerable depth to any advanced collection. Intrepid adventurers Lewis and Clark were engaged to explore this new land, and their adventures are still highly regarded and studied today. Meanwhile, struggles to keep the Philadelphia Mint moving forward were continuing. The annual yellow fever epidemic cost not only many lives in the Philadelphia area, but often brought the Mint to a close in late August until October when the first frost came. Little did the Philadelphia inhabitants know that this dreaded disease was carried by mosquitoes coming into Philadelphia Harbor from South America. The bugs then hatched from eggs laid inside the drinking water barrels for the sailors. As fate would have it, when the ships arrived in harbor, the eggs would hatch and the infected bugs would go out and seek the human population — which just happened to be in Philadelphia. Once bitten by a yellow fever infected mosquito, the victim would develop a fever and the proscribed treatment was to bleed the victim. Now this is known to weaken the body further. In some years the yellow fever outbreak was severe; in others it was comparatively minor. The local papers of the time listed out the victims and those that had perished. Soon any person that could leave the city for the safer countryside would do so, as victims seemed to be clustered around the downtown area (near the wharf and, hence, the point of arrival for the mosquitoes). At the time this was happening, no one had any idea how the disease was transmitted or that the boats and mosquitoes had any connection to the dreaded yellow fever epidemics. This mystery would not be solved for nearly another 100 years. Holding this historic coin in your hands elicits so much history. Who owned it, how did it survive, and who kept it so well all these generations? As is often the case, we cannot know, but we have ample evidence that this coin was well preserved and carefully kept for posterity — for here it is in all its glory. The item “1803 Draped Bust Silver Dollar. BB-252, B-5. NGC MS-63″ is in sale since Sunday, August 5, 2018. This item is in the category “Coins & Paper Money\Coins\ US\Dollars\Early Dollars (1794-1804)”. The seller is “crabbit7″ and is located in Pensacola, Florida. This item can be shipped worldwide.