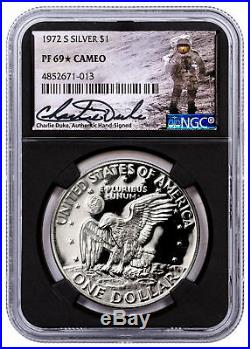 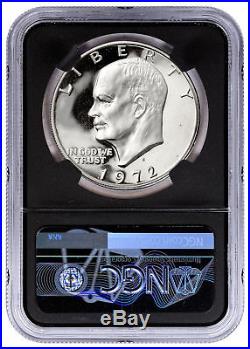 The New York Bank Hoard. Coins That Never Were. National Wildlife Week Sale! 1972-S Silver Eisenhower Dollar NGC PF69 Cameo Charlie Duke Signed SKU54675. Why add this 1972-S Eisenhower Proof Silver Dollar to your collection? The Eisenhower Dollar was introduced by the U. Congressional legislation authorizing creation of the coin was passed on December 31, 1970, requiring its design to honor Dwight D. Eisenhower and the famed Apollo 11 space flight in 1969, when man first walked on the moon. This Eisenhower Dollar was struck in 1972 at the San Francisco Mint from a composition of 40% silver and 60% copper, its mintage recorded as 1,811,631, the third lowest proof mintage of series. Eisenhower Dollar Design by Frank Gasparro. Eisenhower is depicted on the obverse. Inscriptions include “LIBERTY, ” “IN GOD WE TRUST, ” “1972” and the “S” Mint mark. The reverse features an eagle landing on the moon’s surface while clutching an olive branch, with the Earth in the background. Inscribed “UNITED STATES OF AMERICA, ” “E PLURIBUS UNUM” and ONE DOLLAR. Almost Perfect Proof 69 with Charlie Duke Signed Label. This 1972-S Eisenhower Proof Silver Dollar was submitted to Numismatic Guaranty Corporation (NGC) for grading. For its full strike, nearly flawless surface and remarkable contrast between finishes, the exceptional proof earned the grade of Proof 69 Cameo. The coin was additionally awarded a “Star, ” which is given to coins that exhibit exceptional eye appeal. The silver dollar is sealed in a NGC holder accompanied by a label bearing the signature of Charlie Duke, the Apollo 16 Lunar Module Pilot. Add this virtually flawless 1972-S Silver Eisenhower Dollar with a hand signed label to your collection today! Specifications for this 1972-S Silver Eisenhower Dollar NGC PF69 Cameo Charlie Duke Signed SKU54675. Charlie Duke Signed label. We cannot make any price adjustments after the sale is complete. Product Photo Policy: MCM attempts to display product images shown on the site as accurately as possible. We take all of our photos in house and due to reflections on the mirrored or proof surfaces of a coin there may appear to be’black’ when there is not. If a coin has a color on it at all it will be described as’colorized’ in the description or title. Due to the large inventory we sell, we use stock photos. Serial numbers will vary from the image shown unless specifically stated in the product listing that the item pictured is the item you will receive. INTERNATIONAL ORDERS POLICY: We are accepting international orders from select countries. These charges are the customer’s responsibility. However, we cannot guarantee this due to the volume of orders we process each day. Beyond the 30-day return period, Company is under no obligation to accept return of any product, but may in its discretion do so pursuant to this policy, for up to one year from the invoice date. ModernCoinMart (MCM) was launched in 2004 and quickly set the standards for online sales of bullion, US coins and world coins. Join over 100,000 loyal customers and feel confident purchasing from a company that’s spent a decade building a solid and stellar reputation trusted and recognized around the world. That’s the MCM way. View more great items. This listing is currently undergoing maintenance, we apologise for any inconvenience caused. The item “1972-S Silver Eisenhower Dollar NGC PF69 Cameo Charlie Duke Signed SKU54675″ is in sale since Thursday, August 16, 2018. This item is in the category “Coins & Paper Money\Coins\ US\Dollars\Eisenhower (1971-78)”. The seller is “mcm” and is located in Sarasota, Florida. This item can be shipped worldwide.