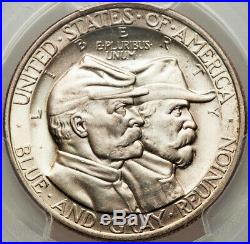 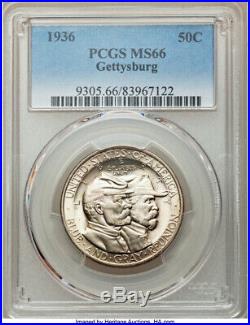 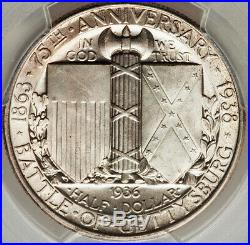 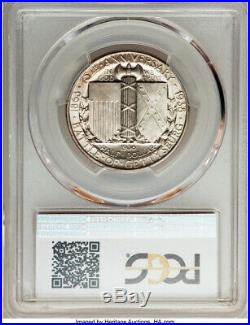 We believe first class collectibles combined with exceptional customer service should mark the height of your consumer happiness! That said, we are human and make mistakes. We simply ask this: if you have a problem, please allow us the courtesy of addressing any and all problems FIRST before leaving a comment or ratings or beginning a return etc. We’d be very grateful to you. After all, what’s the point of giving good customer service when things are easy, right? This does not include any items damaged within the first 30 days. Battle of Gettysburg Commemorative Silver Half Dollar. The Battle of Gettysburg, which occurred from July 1st-3rd of 1863, was one of the deadliest fights of the Civil War and marks the beginning of the long and painful Confederate withdrawal and ultimate defeat in 1865. In observance of the battles 75th anniversary, the Pennsylvania State Commission sought to have a commemorative coin issued to honor the memory of those who fought and died. They were successful, and legislation was passed on June 16, 1936 which called for the minting of no more than 50,000 half dollars commemorating the battle. The Commission hired Philadelphia sculptor Frank Vittor to design the coin. In a departure from most of the commemorative coin programs of the era, Vittors original models were well-received by the Commission of Fine Arts from the onset. One of the only major issues that the Commission had with the coin was the similarity between the Union and Confederate soldiers on the obverse. This might have actually been an intentional nod towards the Civil War theme of brother against brother and was not changed. Final approval of the design was given on March 24th, 1937. The dies were then prepared in Philadelphia, and the maximum mintage of 50,000 was produced at the Mint there in June. Vittors obverse design portrays conjoined busts of Union and Confederate veterans in uniform facing right. Above are the mottoes LIBERTY and EPLURIBUSUNUM. Arranged in arcs around the periphery are the legends UNITED STATESOFAMERICA and BLUEAND GRAY REUNION, separated by stars. The reverse is dominated by Union and Confederate shields, separated from one another by fasces. Wrapped around these elements are branches of oak and olive, perhaps symbolizing war and peace. The date 1936 appears below; this was specified in the enabling act, though it has no other relevance to this coin. Below the date is the value HALFDOLLAR, while above the shields is the motto IN GOD WE TRUST, separated by the blades of the fasces. Around the periphery are the inscriptions 75THANNIVERSARY and BATTLEOFGETTYSBURG and the dates 1863 and 1938, all separated by stars. After the event, the remaining coins were transferred to the American Legion in Pennsylvania. The Gettysburg commemorative half dollar was struck to commemorate the 75th anniversary of one of the most important battles of the Civil War. It was a worthy commemorative, but abuses were many during the commemorative boom of the 1930s. The 75th anniversary was to be held in 1938, but once again the promoters sniffed an immediate profit and simply could not wait. The Commission originally requested 20,000 from Philadelphia, 15,000 from Denver, and 15,000 for San Francisco to make up the quantity, an idea that was rejected. The coins were dated 1936, a year completely irrelevant to the situation. The Gettysburgs were only struck in Philadelphia and 26,928 were originally distributed. Whatever the abuses of the original issue, today Gettysburgs are very popular with commemorative collectors. The design is impressive and the event commemorated was indeed monumental. The Gettysburg is moderately scarce in Gem condition. It is more scarce than the New Rochelle, Antietam, Elgin, Roanoke, Norfolk, Wisconsin, and York. It is not as rare as the Connecticut and Robinson and the Gettysburg is about equal in rarity to the Lnychburg, Maryland, and Albany. The typical Gettysburg is a very nice coin. Most survivors have relatively clean, mark-free surfaces. Luster is usually excellent and often quite white and flashy. The item “1936 Gettysburg Commemorative Silver Half Dollar NGC NS 66 LUSTER OF ALL LUSTER” is in sale since Saturday, January 25, 2020. This item is in the category “Coins & Paper Money\Coins\ US\Commemorative\Silver (1892-1954)”. The seller is “redoubt_numismatics” and is located in San Antonio, Texas. This item can be shipped worldwide.