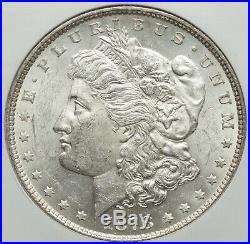 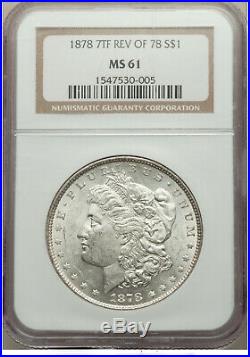 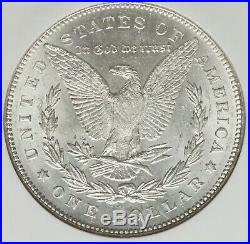 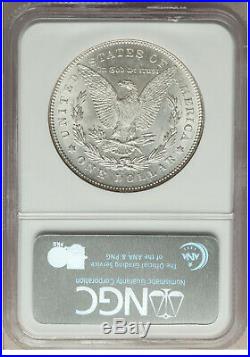 A First Year of Stumbles for an American Institution. In 1878, the brand new Morgan dollar design made its debut. The original design featured an eagle with 8 tail feathers. However, it was soon discovered that this was an incorrect number as bald eagles always have an uneven number of tail feathers. Only three-quarters of a million Morgans were struck with the 8TF design before the change was made, making this a rare and popular type for the Morgan dollar series. Can We Settle on Something Folks, Please? The 1878 7 tail feathers dollar represents the final design of the year. Here is a description of reverses: The 1878 7 tail feathers issue was struck in two major reverse variations: The first is the Second Reverse, with 7 tail feathers, with parallel top arrow feather (P AF), and concave breast on the eagle. This is often referred as the Reverse of 1878. Striking time not known. Breen estimated the production quantity at 4.9 million coins, while Wayne Miller suggested seven million as a more likely figure. My estimate is 7.2 million (based upon proportionate population reports and observed pieces). The other 7 tail feathers issue is the Third Reverse, with slanting top arrow feather (SAF) and convex breast to the eagle. This is the Reverse of 1879. Breen estimated the production quantity at 4.3 million coins; Wayne Miller suggested two million. My estimate is also two million (based upon proportionate population reports and observed pieces) Walter H. Breen in his Encyclopedia gives estimated striking times for the various 1878 dollar issues, but this presupposes a first-in, first-out use of dies relative to their preparation times, a situation which may not be the case. Morgan’s 1877 pattern half dollars, and his pattern silver dollars of early 1878, all had seven tail feathers. Thus, this was the standard number, not a change from eight tail feathers. The 1878 8 TF was a variant. So. Once the Ornithology Issue Was Solved. Finally settled on a design (different varieties would proliferate over the next several decades) the Morgan dollar was a United States dollar coin minted from 1878 to 1904, and again in 1921. It was the first standard silver dollar minted since production of the previous design, the Seated Liberty dollar, ceased due to the passage of the Coinage Act of 1873, which also ended the free coining of silver. The coin is named after its designer, United States Mint Assistant Engraver George T. The obverse depicts a profile portrait representing Liberty, while the reverse depicts an eagle with wings outstretched. The mint mark, if any, appears on the reverse above the “o” in “Dollar”. The dollar was authorized by the BlandAllison Act. Following the passage of the 1873 act, mining interests lobbied to restore free silver, which would require the Mint to accept all silver presented to it and return it, struck into coin. This act, once again, was repealed in 1893. When those silver reserves were depleted in 1904, the Mint ceased to strike the Morgan dollar. The Pittman Act, passed in 1918, authorized the melting and recoining of millions of silver dollars. Pursuant to the act, Morgan dollars resumed mintage for one year in 1921. The design was replaced by the Peace dollar later the same year. In the early 1960s, a large quantity of uncirculated Morgan dollars in their original bags were discovered in the Treasury vaults, including issues once thought rare. Individuals began purchasing large quantities of the pieces at face value and then removed them from circulation through hoarding, and eventually the Treasury ceased exchanging silver certificates for silver coin. Beginning in the 1970s, the Treasury conducted a sale of silver dollars minted at the Carson City Mint through the General Services Administration. In 2006, Morgan’s reverse design was used on a silver dollar issued to commemorate the old San Francisco Mint building. The item “Seven Tail Feather 7TF Reverse of 1878 Morgan Silver Dollar NGC MS 61 Lustrous” is in sale since Monday, September 16, 2019. This item is in the category “Coins & Paper Money\Coins\ US\Dollars\Morgan (1878-1921)”. The seller is “redoubt_numismatics” and is located in San Antonio, Texas. This item can be shipped worldwide.