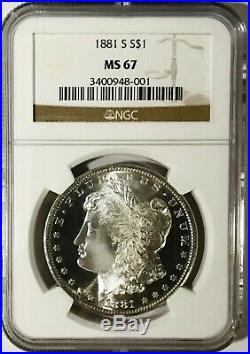 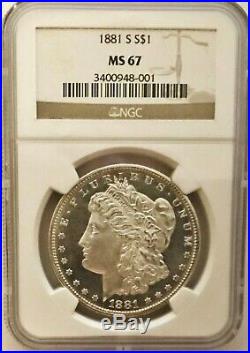 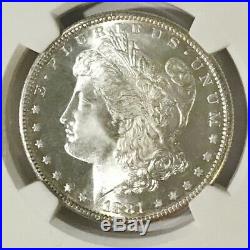 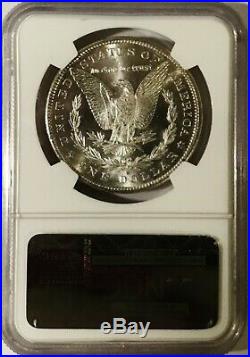 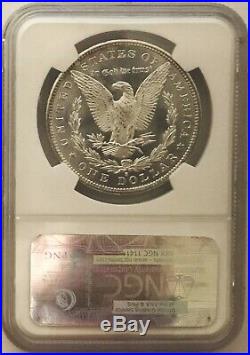 DON’T MISS OUT WITH 12 WATCHERS. THIS ONE WON’T LAST LONG! Great feedback check out some of the recent feedback we’ve received from our customers. An accurate description of an ungraded Morgan? One of the best! And thank you to ALL of our customers for allowing us to serve you with quality coins, accurate and honest descriptions and photos, and above-and-beyond service. Your satisfaction will always be our No. An 1881-S Morgan Dollar certified MS 67 by NGC. This coin is a lustrous gem in every sense of the word. Proof-like on the obverse and very close to PL on the reverse, it features dark fields, highly lustrous devices, albeit with a little chafe chatter around Liberty’s chin area see photo 3 — keep in mind, it’s barely visible in hand and nowhere near as pronounced as the photo makes it out to be. S you would expect with such a rarified grade, this coin has only a very little chatter throughout. Light frost is visible. Through 95 percent of Liberty’s face, though I wouldn’t necessarily classify this one as having an obverse cameo. Remember, photos in shadow will always exaggerate the cameo effect so keep that in mind as you look at the second photo. It’s not a classic black-and-white by any means, but. Liberty’s lines do have above-average definition and there is decent contrast here. The only drawback I can see with this coin is the aforementioned chafe chatter and some patchy build-up on on Liberty’s cheek. As a result there’s some inconsistency in color at certain angles, with the odd spot of lighter contrast. It also has some small abrasions up near the eyebrow and beneath the eye, though that’s not unusual for this series, even in very high grades. In hand, though, these flaws are all but invisible without a loupe, and are nowhere near as noticeable as the photo indicates. The only other chatter is confined to three or four small nicks or runs on the left obverse, a tiny run or two on the right that’s barely noticeable, and the previously some abrasions around Liberty’s eye and chin. The vast majority of these flaws — including the chafe on Liberty’s chin — are all but invisible in hand, or are only perceptible in certain light and at certain angles. The reverse is almost as nice, with dark fields, well-defined and frosted devices and just a couple of runs above the motto and a very small area of build-up above the eagle’s head. This coin is also a VAM 32. Though not listed on the NGC sticker, there is no doubt that this one is indeed a VAM 32. It has all the markers, from the doubled “88” and the bulge outwards of the second 8’s lower right loop, to the doubled top reverse, including some letters that are strongly doubled, and the tiny die lines in the “R” in Liberty. The mint mark is also re-punched. Overall, an outstanding silver dollar in top-of-the-line condition. It really doesn’t get a whole lot better than this when it comes to business strike Morgans, especially considering this coin is all but proof-like. One note : The holder has a small ding on the bottom front, right at the lower right curve of the raised edge the part where most people would place their right thumb while holding the slab from the bottom with two hands. It is a minimal (less than a half centimeter) chip, and has zero effect on the integrity of the case or, needless to say, the coin, its grade or its NGC guarantee. And don’t forget to check out my other listings when you have a moment. Thank you for your continued support of Shenandoah. Don’t like it? Found a better price? Run it through the wash? Eh, yeah that would be a problem. But almost anything else that’s right, n o problem. Thank you for reading and for looking at my items. The item “1881-S Morgan Dollar NGC MS 67, Obv. PL, VAM 32 +MEMORIAL DAY SALE! PRICE CUT! +” is in sale since Wednesday, March 27, 2019. This item is in the category “Coins & Paper Money\Coins\ US\Dollars\Morgan (1878-1921)”. The seller is “shenandoah.blue” and is located in Staunton, Virginia. This item can be shipped to United States, Canada, United Kingdom, Denmark, Romania, Slovakia, Bulgaria, Czech republic, Finland, Hungary, Latvia, Lithuania, Malta, Estonia, Australia, Greece, Portugal, Cyprus, Slovenia, Japan, Sweden, South Korea, Indonesia, South africa, Belgium, France, Hong Kong, Ireland, Netherlands, Poland, Spain, Italy, Germany, Austria, Bahamas, Mexico, New Zealand, Singapore, Norway, Saudi arabia, United arab emirates, Bahrain, Croatia, Malaysia, Chile, Colombia, Costa rica, Panama, Trinidad and tobago, Guatemala, Honduras, Jamaica, Bangladesh, Brunei darussalam, Ecuador, Egypt, Gibraltar, Iceland, Jordan, Cambodia, Cayman islands, Sri lanka, Oman, Peru, Paraguay, Reunion, Viet nam, Uruguay.