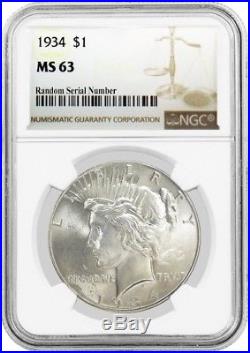 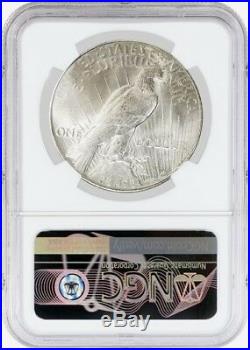 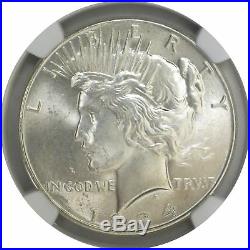 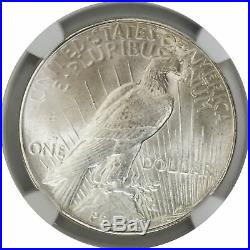 A 1934 (Philadelphia Struck) Silver Peace Dollar graded Mint State 63 (MS-63) by NGC. This piece will display varying degrees of an original luster, light scattered contact marks and excellent details. Some pieces may display toning. The total mintage for this date & mint: 954,057. The photos provided may not be the exact coin you receive, however it represents the same product. The Peace Dollar, designed by Anthony de Francisci, superseded the Morgan Dollar under the Pittman Act of 1918. This mandated that the United States Mint strike millions of legal tender silver dollars to replenish the population following the melting of 270,232,722 Morgan Dollars. In accordance with the Pittman Act, the previously melted pieces were to be restruck in 1921 using George T. However, Numismatists lobbied the U. Mint to redesign the silver dollar to commemorate the peace era following World War 1, to no avail. Although Congress dismissed the request for a redesign, lobbyists were able to persuade government officials to approve the action, and in December of 1921 U. Treasury Secretary Andrew Mellon passed the bill. Following the approval for the redesign, on December 28th, 1921 the first peace dollars were struck, with a total mintage of 1,006,473 and on January 3, 1922, were placed in circulation. The pieces featured a high relief bust of the goddess of Liberty in profile, with Francisci’s monogram in the field under the neck and the date directly below on the obverse. The reverse features a bald eagle in the resting position clutching an olive branch with the word’PEACE’ below. The Peace Dollar followed the same parameters as the previous Morgan Dollar; 412.5 grains of. 100 copper, a net weight of. 77344 ounces pure silver, and a total weight of 26.73 grams 0.942873 oz. Featuring a reeded edge and 38.1 mm diameter. Succeeding the first peace dollars that were struck bearing the date 1921, the first 35,401 Peace Dollars of 1922 adopted the same design. However, after the high relief was found to be impractical for minting, the design was lowered to a shallow relief and most of the original 35,401 pieces were melted. In 1928, when the Pittman Act requirements were fulfilled, the mint halted the production of Peace Dollars, however in 1934 & 1935, they were restruck following additional legislation. Packages are no longer insured if tracking information shows the package is delivered. We will only cover packages that are lost in transit or damaged. 100% satisfaction is our priority, please reach out to us if you have any questions or concerns. In such cases this will be specified within the listing. Offers will not be considered on listings unless you use the Make Offer feature, nor will we end a listing early to consider an offer. We reserve the right to cancel sales that may or may not have typography issues within the listings, pricing inaccuracies, systematic faults by our system, and/or errors caused by eBayÕs system. We do not offer or make price adjustments based on the market fluctuations of precious metals, or for any other reason. To send us a message. Our direct contact information is as follows. Why Shop with Us? Why Shop With Us. The item “1934 $1 Silver Peace Dollar NGC MS63″ is in sale since Friday, December 21, 2018. This item is in the category “Coins & Paper Money\Coins\ US\Dollars\Peace (1921-35)”. The seller is “coinexchange267″ and is located in Hartsdale, New York. This item can be shipped to United States, Canada, United Kingdom, Denmark, Romania, Slovakia, Bulgaria, Czech republic, Finland, Hungary, Latvia, Lithuania, Malta, Estonia, Australia, Greece, Portugal, Cyprus, Slovenia, Japan, Sweden, Indonesia, Thailand, Belgium, France, Hong Kong, Ireland, Netherlands, Poland, Spain, Italy, Germany, Austria, Bahamas, Singapore, Switzerland, Norway, Saudi arabia, Ukraine, United arab emirates, Qatar, Kuwait, Bahrain, Croatia, Malaysia, Brazil, Chile, Colombia, Viet nam, Uruguay, China, South Korea, Taiwan, South africa, Israel, Mexico, New Zealand, Philippines, Turks and caicos islands, Bangladesh, Ecuador, Egypt, Jordan, Luxembourg, Oman, Peru, Paraguay.