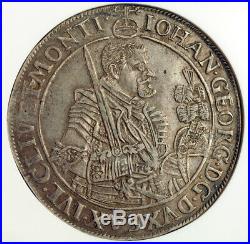 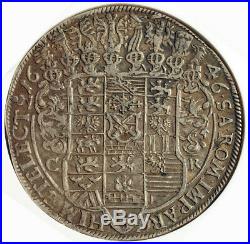 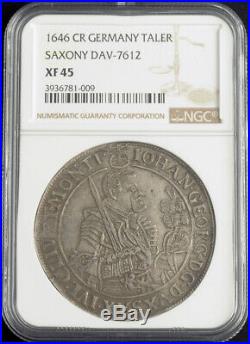 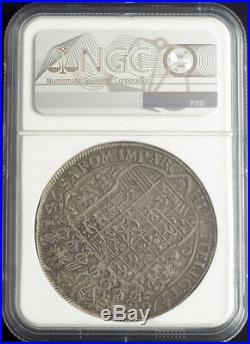 1645, Saxony, John George I. Beautiful Silver Thaler (Rix Dollar) Coin. Mint Year: 1645 Privy mark: acorn on twig Mint Place: Dresden (Germany) Reference: Davenport 7612, KM-425. Certified and graded by NGC as XF-45! Denomination: Silver Thaler (this type is also known as Rix Dollar) Mint Official: Constantin Rothe (C-R, engraver in Dresden for Bautzen) Weight: 28.72gm Diameter: 44mm Material: Silver. Obverse : Half-length armored figure of John George right, holding sword and a plummed and decorated helmet in front. Reverse : Large composite coat of arms of Saxony, topped by eight plummed tournament helmets with family decorations ontop. Mint master´s initials (C-R) in fields! For your consideration a broad 45mm! Silver thaler, issued under John George as Duke of Saxony (German State) during 1650. Due to the obverse simillarity with the dutch rix daalder this type of thalers are often refered as rix-dollars. The thaler (predecessor of the dollar) was a very stable denomination and its weight did not changed for more than 300 years all over Europe. A beautiful specimen and a great addition! John George I (German: Johann Georg I ; 5 March 1585 – 8 October 1656) was Elector of Saxony from 1611 to 1656. Born in Dresden, he was the second son of the Elector Christian I and Sophie of Brandenburg. He succeeded to the electorate in 23 June 1611 on the death of his elder brother, Christian II. The geographical position of electoral Saxony rather than her high standing among the German Protestants gave her ruler much importance during the Thirty Years’ War. At the beginning of his reign, however, the new elector took up a somewhat detached position. His personal allegiance to Lutheranism was sound, but he liked neither the growing strength of Brandenburg nor the increasing prestige of the Palatinate; the adherence of the other branches of the Saxon ruling house to Protestantism seemed to him to suggest that the head of electoral Saxony should throw his weight into the other scale, and he was prepared to favor the advances of the Habsburgs and the Roman Catholic party. Thus he was easily induced to vote for the election of Ferdinand, archduke of Styria, as emperor in August 1619, an action which nullified the anticipated opposition of the Protestant electors. The new emperor secured the help of John George for the impending campaign in Bohemia by promising that he should be undisturbed in his possession of certain ecclesiastical lands. Carrying out his share of the bargain by occupying Silesia and Lusatia, where he displayed much clemency, the Saxon elector had thus some part in driving Frederick V, elector palatine of the Rhine, from Bohemia and in crushing Protestantism in that country, the crown of which he himself had previously refused. Gradually, however, he was made uneasy by the obvious trend of the imperial policy towards the annihilation of Protestantism, and by a dread lest the ecclesiastical lands should be taken from him; and the issue of the edict of restitution in March 1629 put the capstone to his fears. Still, although clamouring vainly for the exemption of the electorate from the area covered by the edict, John George took no decided measures to break his alliance with the emperor. Meanwhile Gustavus Adolphus had landed in Germany, aiming to relieve Magdeburg. Gustavus attempted to conclude an alliance with John George to allow him to cross the Elbe at Wittenberg, but John George remained hesitant to join the Protestant cause and the discussions went nowhere. Hoping that an alliance would be concluded eventually, Gustavus avoided any military action. Tilly, commander of the main imperial force, was also concerned about the possibility of an alliance, no matter how unlikely it was at the time. In order to preempt any such move, he invaded Saxony and started to ravage the countryside. This had the effect of driving John George into the alliance he had hoped to preempt, which was concluded in September 1631. The Saxon troops were present at the battle of Breitenfeld, but were routed by the imperialists, the elector himself seeking safety in flight. Nevertheless he soon took the offensive. Marching into Bohemia the Saxons occupied Prague, but John George soon began to negotiate for peace and consequently his soldiers offered little resistance to Wallenstein, who drove them back into Saxony. However, for the present the efforts of Gustavus Adolphus prevented the elector from deserting him, but the position was changed by the death of the king at Lützen in 1632, and the refusal of Saxony to join the Protestant league under Swedish leadership. Still letting his troops fight in a desultory fashion against the imperialists, John George again negotiated for peace, and in May 1635 he concluded the important treaty of Prague with Ferdinand II. His reward was Lusatia and certain other additions of territory; the retention by his son Augustus of the archbishopric of Magdeburg; and some concessions with regard to the edict of restitution. Almost at once he declared war upon the Swedes, but in October 1636 he was beaten at Wittstock; and Saxony, ravaged impartially by both sides, was soon in a deplorable condition. At length in September 1645 the elector was compelled to agree to a truce with the Swedes, who, however, retained Leipzig; and as far as Saxony was concerned this ended the Thirty Years’ War. After the peace of Westphalia, which with regard to Saxony did little more than confirm the treaty of Prague, John George died (1656). Although not without political acumen, he was not a great ruler; his character appears to have been harsh and unlovely, and he was addicted to drink and other diversions such as hunting. The item “1655, Saxony, John George I. Beautiful Silver Thaler (Rix Dollar) Coin. NGC XF45″ is in sale since Sunday, February 17, 2019. This item is in the category “Coins & Paper Money\Coins\ World\Europe\Germany\German States (up to 1871)”. The seller is “coinworldtv” and is located in Europe. This item can be shipped worldwide.